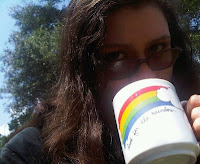 
Posted by Rainbow Renee at 7:16 PM No comments:

Fans:
Many years ago this blog was started to provide information to fans who wanted to stay informed on updates and changes to the Rainbow Brite.Co.Uk website as well as a few articles written to share information.

This format was hard to maintain and got nearly forgotten for a very long time. Yet, we know we needed a blog. A place to quip and discuss topics that are Rainbow Brite related from a fan. Renee', a Rainbow Brite fan, music lover and friend is going to try to fill that role. Blog reigns are now going to be handed over to her.

Like with the website and here we hope that fans enjoy the information provided but we hope you also respect the persons involved and their privacy.

We request that you respect all fans and not post comments about personal or private issues not related to Rainbow Brite or the blog posts. (No Spam!)

Enjoy the blog! Enjoy the information, images, and share the Rainbow.
Posted by Rainbow Renee at 8:15 PM No comments: