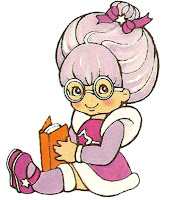 Hey Color Kids!
When I decided to help with the Rainbow Brite website, I knew that what I wanted was the find out all the Rainbow Brite mysteries and create a reliable source of information fans could depend on. From writing to individuals involved with tiny details about the products, the television show and more I knew it would be worth it to uncover and find new rainbows to share with others.

The websites most recent acquisition of information has uncovered so many  new rainbows we are in a virtual color cave of color crystals about the burst! But if you are going to create a website about a subject it DOES take a lot of work. But in the end it is worth it for everyone who is helped or made happy by the information that is found.

I want to give anyone who is thinking about researching their own subjects a new resource they probably didn't know was there. This resource is the Library. At your own local library you can use their newspaper archive to find original advertisements and announcements to tons of 80's properties. However one library is very important and special. That would be the Margaret Herrick Library, which is a part of the Academy of Motion Pictures Arts and Sciences. You  may have heard of them. They do the Oscars.

The Margaret Herrick Library is located in Beverly Hills, California and archives nearly anything in movies and tv. It was here we learned of the "Howard R Cohen Papers".  Howard R Cohen is the writer of many of the later Rainbow Brite specials, tv show and film. Many of his papers were given to the library and are in the "Special" Collections section of the library. Being part of the "Special" collections, we had to ask permission to review their resources. The notes from the collection included details such as dates and character descriptions and story outlines. We cannot reproduce the information exactly due to copyrights, but the information will be summarized,  listed and the source cited on articles where the information is used.

For example: Some of the information we uncovered was a cast list for one of the Rainbow Brite Episodes which uncovered the actress chosen to play Moonglow and Tickled Pink. This ended up being Rhonda Aldrich who played the Evil Princess in the feature film.

Your local library will have a section for their news papers on film. I recommend holiday papers (November/December) for those researching toys or other kids properties. For those who want to more in depth research in to film or TV Media please check out the Margaret Herrick Library. Please be sure to review their hours and on site rules when requesting or visiting to assure a pleasant and productive visit.

Note: Special Collections access is given for research purposes only, copies of the information is not permitted for private collections. Full copies of scripts are not permitted due to copyrights and all of the information was researched from the above mentioned collection but was not quoted or copied directly from it.
Posted by Rainbow Renee at 9:14 PM No comments:

Hey Color Kids,
I've had a few people ask how it is I got involved with RainbowBrite.Co.Uk since I'm not British. I hadn't realized I hadn't really spoken about it, so I thought I would now in case there were others who wanted to know.

It starts back to when I was like everyone else. I was a fan just on the Internet looking to find out as much as I could about Rainbow Brite. Back then I only knew what I had as a child and I didn't know the details. I discovered there was so much I didn't know about the stories and with every question I found an answer to I had even more. I used to even write Fan Fiction! But in my fiction my details were wrong.

I didn't think much of it at first. I had planned on making my own "Rainbow" themed site a long time ago but didn't. I gathered all my research and let it sit on old hard floppy discs for years.

I did get involved with the Rainbow Brite audio tape project a while back, voicing Twink Sprite, but didn't get involved beyond that since I moved and didn't have Internet from 2006 - 2008.

Then I got the urge to find the Rainbow again in 2008. I started to talk to old friends online and wanted to discuss Rainbow Brite, and decided if we were going to find out more about the brand we loved we should just do it ourselves.

We started with a basic layout and we each had different tasks. Some worked on the forums, others on website, and research. Over the years others have dropped out but of those of us who are around still, we try to keep things fun.

I took much of the website and research a little while back, being in the United States and having access to a lot of facts others didn't. That and I LOVE research. I love chasing rainbows and it seems that is all I do these days! Who voiced Twink on the records? Who voiced Tickled Pink and Moonglow in the show? What is the real spelling of Moonglow's and other character's names? When was Rainbow Brite a Special Guest on the Macy's Thanksgiving Day Parade? Found all of that out and more.

It takes a lot of patience. Some letters I send out don't get replies for YEARS, but when they do, the site is the first to know! And when the site knows, that means YOU know!

For everyone who loves Rainbow Brite and finds the website, the Wiki, and videos fun...you are what make the job worth while. We don't get paid for what we do, and any donations we get go straight to research and facts for YOU!

We hope you enjoy and tune in for more! If  you have anything you would like to contribute, or are curious about just let us know! Send us your messages on the "contact" page of the website.

Until the next entry we hope you Have a Rainbow Day!

Posted by Rainbow Renee at 6:24 PM No comments:

Blast from the Past

Today's April's fools day prank was a cleaver one by mister Murky! He took the www.rainbowbrite.co.uk website and took it back to the past! Replicating the original website from the 1990's that advertised the Rainbow Brite re-release. We hope you all enjoyed it, and for those who didn't see it, you can see a screen grab below!
Have a Rainbow Day!

Posted by Rainbow Renee at 6:31 PM No comments: