Hi Color Kids,
Things are slow here with updates. Sadly real-life events have kept me from exploring my Rainbow Land as much as I would like. Still I am here for you guys.

One problem I had was my Starlite had to be put out to pasture. Starlite was my truck. From the moment I bought it, for the past 8 years he has been my "Starlite". It just fit him, being a smaller truck and white, he just seemed like a horse to me. 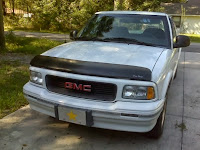 This is a my new Honda Fit Sprite....I mean Sport.

I named him Twink in honor of his spritely size and over all cuteness.

Other things going on is working on the Brite Cast episodes. Sadly we are behind, and it's my fault. I lost half the recording of the August episode and we had to re-record it in September.

Also, I'm working on a long time dream of mine...my very own Rainbow Brite costume. More of that to come in a later post...with pictures...when it's done.

Anyway, until more later, have a Rainbow Day!
Renee'

Posted by Rainbow Renee at 5:54 PM No comments:

Getting ready for a Rainbow Christmas 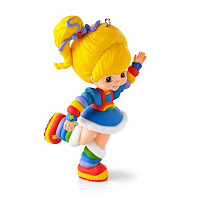 This summer Rainbow Brite's 30th anniversary ornament was released and there are many fans from all over the world who want them. Sadly international shipping is not an option on Hallmark.com.

However in the season of giving and thanks I would like to extend a helping hand to anyone who would like one sent to them over seas. I live in the United States and want to help those who can't get these on their own.

I have checked with my local post office and it seems the postage to ship a package that small would cost about $10 parcel post.

You won't pay anymore for the ornament then if you were to order it yourself. I am not upping the price or charging anything for this, and am doing it as a favor to any Rainbow Brite fan who would want one.

Have a Rainbow Day!
Renee'

NOTE: I am not authorized to "Sell" any Hallmark item, as I am not selling them. This is a courtesy for fans as a favor not for profit.
Posted by Rainbow Renee at 7:06 PM 1 comment: