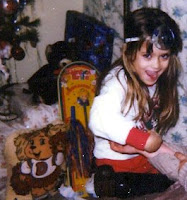 As a child you never really consider yourself a "Collector". At those ages you know there is something you like and you like having those things around you. I kept a lot of my Rainbow Brite collection as I grew, though to be honest I didn't own a lot as a child. My childhood collection was pretty much the following:

I had all the 18" Dolls. Rainbow Brite, Patty O'Green, and Shy Violet. I also had the Baby Brite doll, though I guess she is considered 15",
I had several other plush toys. Starlite, Puppy Brite, and Twink Sprite.

Miscellaneous items I also had.

A lot of the the collection was lost during the many moves of my childhood though I still have some of it left.

When I got older I discovered all these other toys that I didn't have as a child that I could now afford as an adult. It was then that I became a "Collector".

When you become a collector you  start with something that connects to a special moment or memory add to that collection and embellish upon it with more of what you like. But as a collector, where do you begin?

The advice I have to someone who wants to become a collector is to decide on the parts of the collection you love and look for those things. Some people love plush dolls, figures or photos. It's best to concentrate on one thing you like and go after that. You don't really realize how MUCH there really is out there until you look.

Rainbow Brite was printed on clothing, books, toys, and more. The brand was released in the United States, Mexico, Canada, France, Germany, Italy, Australia, Spain, Argentina and more! That is a LOT of stuff to collect or consider collecting. Rather then set out to collect everything, start with one thing/category and go from there. You need to make a plan.

I had the 18" dolls but I didn't have the small dolls. So I started looking there. At the time that I started collecting which was in the late 90's there wasn't much known about the dolls. Since collecting became more popular more "variants" appeared, and as those variants became more common, some became more sought after then others (example: Star Shoes/Red bottom, Etc). We will go over "variants" in a later post.

There are 8 main regular dolls and 3 known dress up dolls. You have every doll for every color and Rainbow Brite, as well as a dress up Rainbow Brite,  Tickled Pink, and Moonglow. You also have the small parts that are more rare that get lost through the years. Mostly these are the removable parts that people didn't keep or fell off. The Hand Sprites are usually the first to disappear. They were the largest part and were meant to come off. You can usually find the doll before you will find the sprite and they can sell for over $5 a piece.

Make a list of the parts you want or need, and keep track of those on Ebay or in  second hand/thrift stores.
If you really cannot locate one item, you may need to look into making the missing item.

If an original part is what you want be prepared to pay more for it. If you don't mind it not being the original part, then you have more options.

One thing I do not recommend is buying the dolls individually if you don't have to. Buy lots. The larger the lot, the more pieces you get for a lower price. Any piece you get a duplicate of can be sold off again later.

For example: a Rainbow Brite, Red Butler, or Patty O'Green doll usually sells for $10 each, but a Buddy Blue or Indigo will sell for $40. If I buy a lot that has Rainbow, Red, Patty, Indigo, and Buddy with their hand sprites for $125, I can sell off the parts I don't need and I bought the item I did need and made the money back.

Sadly a lot of sellers know this trick too and will buy big lots just to profit on a fan. Still, while it is a risk, you have to figure if it's worth it to you.

I personally just bought the last of my doll collection, which was Dress Up Moonglow. She is one of the most rare because she was created but only released in a foreign market. I paid over $150 for her, but it took me years to find one in as good enough condition, and for a price I was willing to pay. Apart from not being in her original box, she is very pretty and perfect condition with her original dress, boots and hair ribbon. All those pieces add to her value and her place in my collection now marks it as a complete doll collection.

Figure how much something is worth to you and spend that. It takes a lot of research. So we wish you luck!
Happy Collecting!

Posted by Rainbow Renee at 6:11 PM