I bought a vintage size 8 McCall's costume pattern and with my mother's help we increased the size of the pattern to fit me, as an adult. My mom chose taffeta as the fabric, because of it's good breathing and shape keeping. Since I live in Florida, the fall days are some what iffy. Between surprise rain, and heat and cold fronts, I know I wanted a costume that could hold up to it. Also, the fabric photographed so well!

A lot of it was experimenting with the pattern and a lot of mistakes and successes. My favorite part of the dress was a part that I designed completely from scratch: The Color Belt.


I made a removable color belt. To get the Rainbow as close to the real belt, I actually increased a real Rainbow Brite image from the 80's and used the belt image as a template. The Rainbow itself is felt, as the costume requested, but I made my own improvements


1: To make the belt have weight and substance I bought firm felt and made an actual belt base. I cut it into strips and sewed the strips together.

2: I wrapped the taffeta fabric around the felt belt, and made a pocket in the back to insert custom LED lights.

3: I bought battery operated lights and arranged them in a “Rainbow” pattern to back light my belt for a fun lighted effect. I wanted a sound effect box, but I didn't have one...maybe in my next costume...

4: I also added two over sized buttons on the back to mimic the real double buttons on a REAL Rainbow Brite image (from behind) 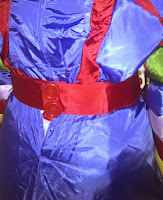 From head to toe, here is the costume 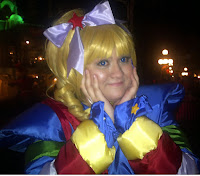 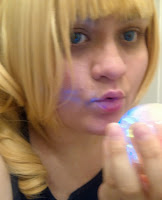 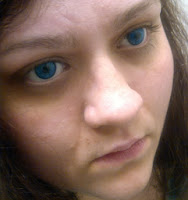 
Basic make up: Pink lip stick, pink cheeks, pale make up (I'm olive skinned, so I had to lighten my skin to match the hair and eyes) 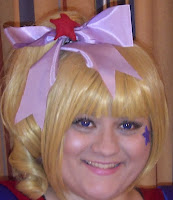 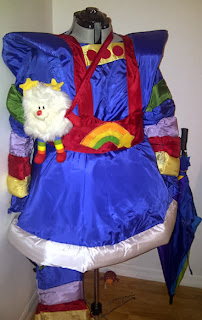 
Over all look: PRICELESS!


I debuted my costume at Mickey's Not-So-Scary-Halloween-Party in Disney World.


The costume was a big hit with fans. My mother came with me and she kept telling me how people were commenting as I walked by.


I stopped for photos a lot, and gave "star sprinkles" (foam star stickers) to anyone who asked for my photo or stopped me to comment on it. This included costumed families and Disney Cast members. One of my favorite is when an official Disney Character actually called to me...a real one! Sadly I was unable to get a photo with them because they went on break, but I love that my costume called to them.


I was told I needed to be in a contest that my costume was so well done. I blushed so much. It was such a wonderful time. I was told I made so many people happy and made their nights by being there representing their childhood and this character.


I hope I did the fans, the brand, and everyone who appreciates costumes justice.

This really was a dream come true. Some times you have to take your dream in your own hands and make it happen.

Also, don't forget to tune in to Brite Cast to hear mine and Katy of Rainbow Brite.Net's costume memories!

Until later,
Have a Rainbow Day!
Posted by Rainbow Renee at 10:06 PM