How to make a Custom “Rainbow Brite” project-able Night Light

This is a fun way to make a custom Rainbow Brite Night Light. Please note: this project requires tools and dealing with electronics, so please only an adult should attempt this project.

First take a “Projectable Night Light”. I chose a blue one with silver base. This one normally projects an underwater scene with fish.\ 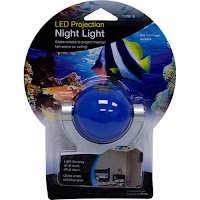 Next carefully take a tri-wing screwdriver, (you can find these as part of a security screwdriver set at most local hardware stores). Remove the three triangle shaped screws.

Next carefully remove the front of the silver plate. This will expose the inner workings of the night light. We don't want to mess with any of these.

Next carefully dismount the projector ball. It is held on with a spring on each side. This allows it to rotate yet still brings power to the LED light inside. 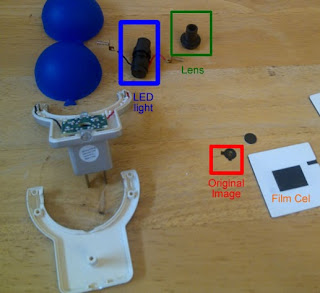 Carefully take apart the projector ball and remove the projector inside. The small round film that is the slide image will come out. This is the image we will be replacing.

What can we replace the image with?

You can use two things that I know of.
1: a view master reel. The view master film frame is nearly as small as the projector film. You will need a hole puncher or Xacto knife to cut the correct shape.

2: a Rainbow Brite projector film cell. These were from the Rainbow Brite and the Star Stealer trailer from the 1980's. The film cells are very big in comparison to the tiny cell you need for the projector, so select a scene that is a wide shot, or a specific character you want projected. You will also need a hole puncher or Xacto to cut the film in the correct shape.

Next, slide the new cell in the place of the old one and put the projector back together.

Once back together, you should get something that looks like this: 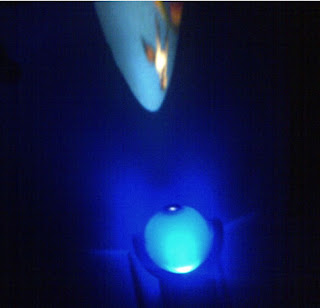 the method I chose was a Film Cell. It is of Rainbow Brite, Starlite, and Twink riding a rainbow. It's a nice “window” in to Rainbow Land that I can project onto my wall, ceiling or anywhere I choose.
Please note the clarity of the image depends on the quality of the image, the distance from the light to the surface you are projecting on and if your cell is laying completely flat inside the projector. 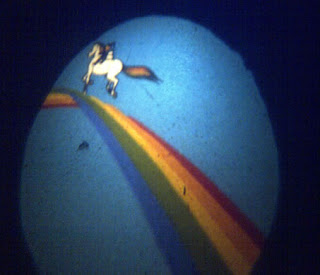 You can currently find a set of cells on Ebay here.

If you try this project, what method did you do? And what image did you get?

Let us know!
Have a Rainbow Day!

Email ThisBlogThis!Share to TwitterShare to FacebookShare to Pinterest
Tags: Custom, How To, Rainbow Brite